9am
It's a short 15 minutes drive to Kuang from Sg Buloh.
Direction from Sg Buloh to Rimbun Dahan- After the police station ( on your left), take the right turn at a traffic light. Shortly after that, you will see Rimbun Dahan  on your right. 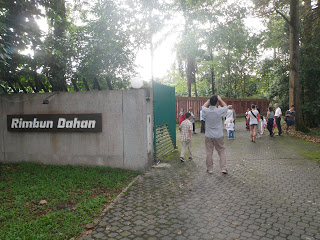 The tour starts right here at the main gate @9am. You can park your vehicle by the road side,  after the first right turn. This is also where the tour ends.
The nature tour is free and conducted by the owner, Angela Hijjas. Rimbun Dahan is open to the public only during art exhibitions and on special occasions. During art exhibitions, the Rimbun Dahan gallery and gardens are open on weekends from 10am to 6am and on weekdays by appointment only. 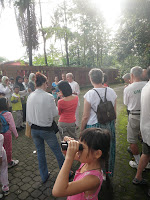 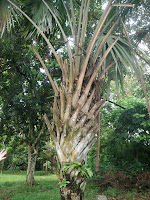 According to Angela, today's group is the biggest that Rimbun Dahan ever had. After an introduction of Rimbun Dahan, our tour started at this tree, next to the gate. Do wear long pants and equipped with mosquito repellant. Some part of the grassy area is not trimmed and can be wet after rain. 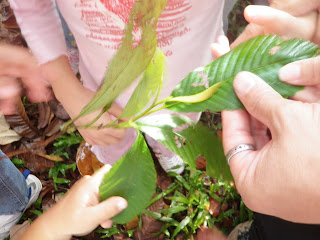 Rough sandy creepy leaves called 'Mempelas' which use to polish and shine metal. 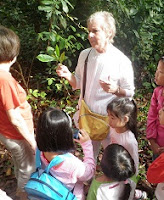 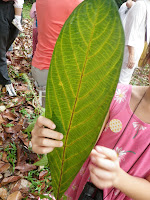 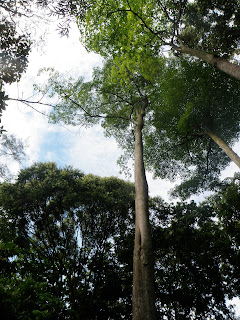 Admiring the beauty of the trees at the huge garden. 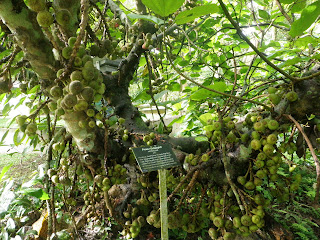 This fig tree (above) originate from Myanmar. And we were told that the tree is sterile as it lacks the agent, a fig wasp, to pollinate the flowers in the fig "fruit". Is interesting to note that each species of fig wasp will only pollinate a respective fig tree species. 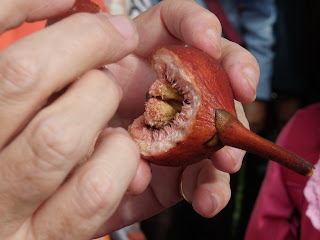 Above was when a fig fruit was open exposing the flowers inside. 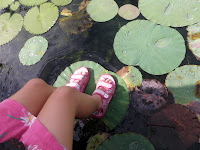 Hui was busy trying to pull the love grass off her sock. She took a while doing that.
En wonder how she could stand on the lily pad like thumbelina. 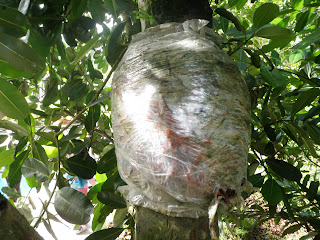 This part of the trunk was wrapped with soil, where roots grew out of it. It is meant for tree grafting. 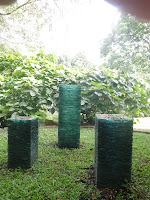 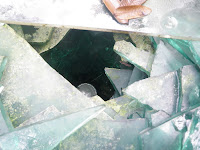 There are few sculptures around the garden created by in-house artist. This one was done using unwanted glass found by the roadside. When the lid is lifted up, a jagged hole can be seen. 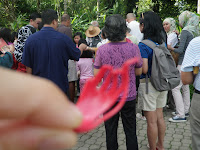 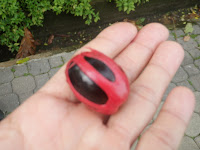 The nutmeg from the garden has a very nice fragrant. 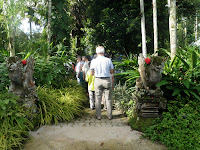 The second part of the tour started from the well laid pathway, with two statues on both side. The supposedly one hour tour extended to more than two hours. Hui 's little feet was tired and she refused to walk any longer. Angela told us to help ourselves with the mulberries from her garden! 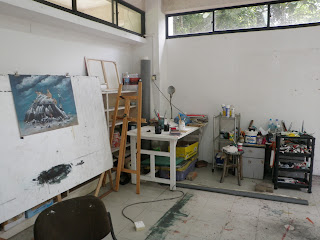 One of the artist room. This little girl is a daughter of an artist currently in residence. We were given a tour into this exquisite kampung house as well.
Posted by Ng Shannon at 1:05 AM