A HS mom suggested we make paper flowers that comes with positive messages to giveaway to people. with the hope to spread love.

With much enthusiasm, they both brought the flowers they folded, to the ice rink on their skating day meet-up with friends.

They started to distribute the flowers to some skaters and then walked to the mall that is next to the ice rink, to give the flowers away to shoppers.

At the mall, many shoppers rejected the flowers and some were scared of them. On the other hand, there were some shoppers who took them happily and politely.

They both gave out all the flowers regardless of the response.

When some shoppers didn't take the flower, En was scared that they would hit her instead, thinking that she had ill-intention.
She feels that the response will be better at the ice rink because she is a skater and that helps to put the other skaters at ease. So the intention of spreading love will reach the recipient better.

True enough, the ice rink staffs and other skaters took the remainder of the paper flowers with open arms. 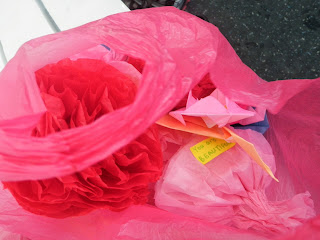 The paper flowers they made, with positive messages written on them. Messages like "You Are Special", "You Are Beautiful" etc.