Save Our Seahorse, Parents and Kids Volunteer Program 23 August 2012 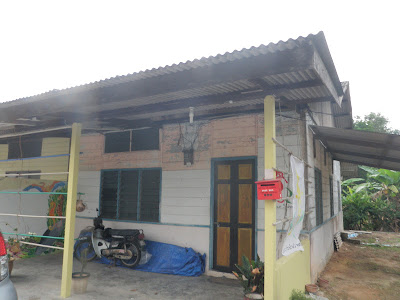 Direction -  Exit Tuas Second Link. Then take Tanjung Pelepas Exit. Follow signage to Kg Pendas (right turning). After the right turn, go straight. About 2km after you drive pass under a highway, lookout for SOS white banner on your right. 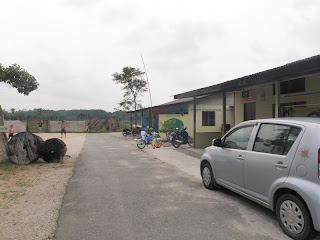 It is a corner house in a row of about 4-5 houses.
I like this quiet corner so much that I strolled up and down the road at night. 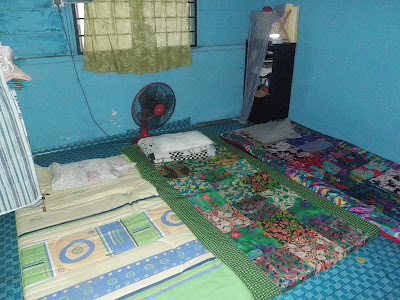 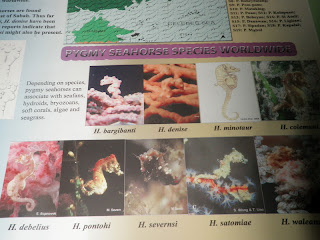 There are so many information leaflets or posters pasted on the wall of the house. I took a long time to digest it and what do you know, I can't recall a thing about it now. 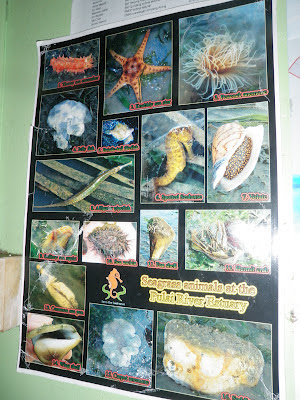 These are the marine life that we will see, so said Siew Lay, the co-ordinator. 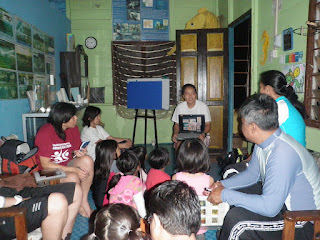 The briefing started at 630am and I was in a daze.
"SOS tagging program is to find out how many seahorses are there, where and how far they move, where the seahorses reproduce and the health status of the seahorse. Spotted sea horse is an endangered species. "
And I thought, the word "endangered" seems to be a common word nowadays. It does sound sad. 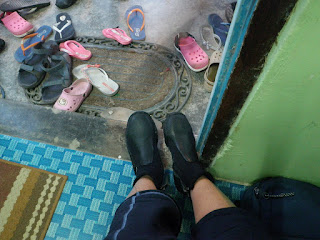 Booties and life vests are available on loan. 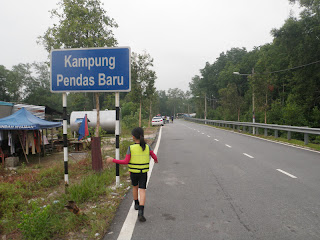 We drove to the Pendas Jetty, about 2km from SOS research station. 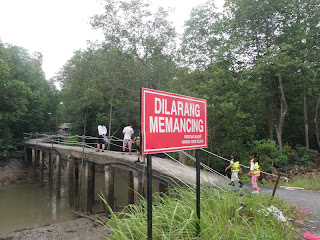 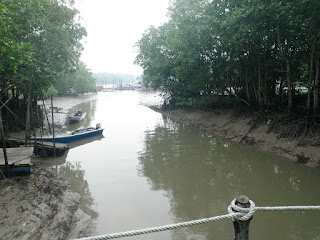 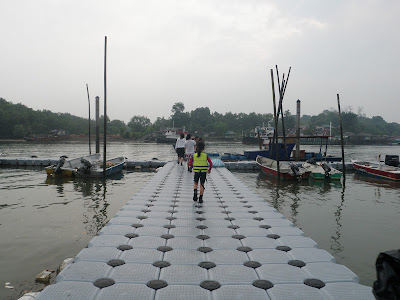 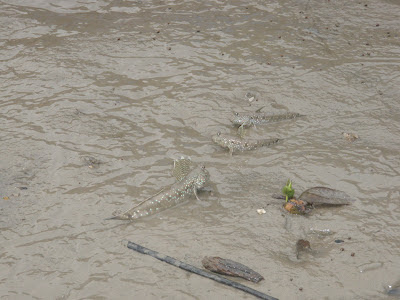 There are lots of mudskippers by the bank. 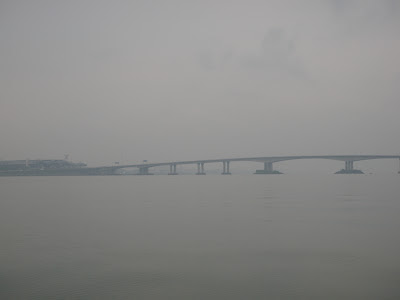 Our boat went under the second link bridge to Singapore. And I remember my older kid asked if she could go by boat when we drove on the second link highway the other day. 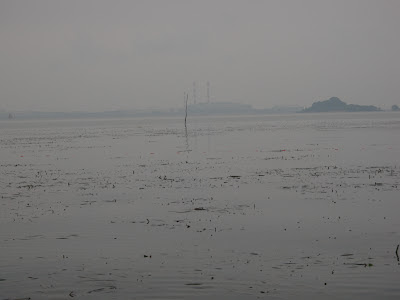 See the thin vertical line on the water?
It is one of the sticks that marked the seagrass bed area. The water was receding and some part of the seagrass was visibly afloat on the surface. 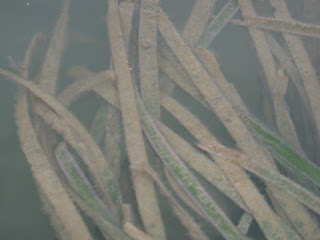 It looked like this when the boat went onto the area.
The tide was not low enough and the weather was not clear as well. 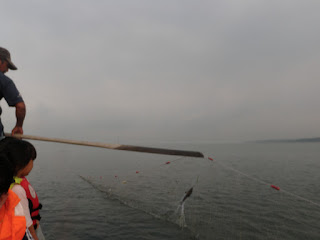 Some fishermen set a net along the seagrass bed. It was upsetting as seahorses might be trapped on the net as well.
Note the foggy weather. 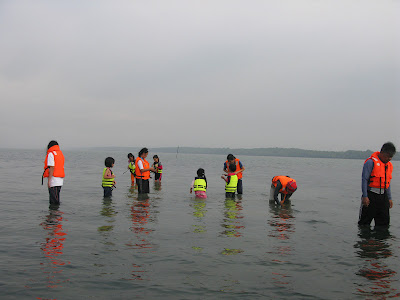 We stepped into the water anywhere even though the tide wasn't low enough to spot the seahorses/pipe fishes.
My older one was reluctant to walk around, worrying she would step on the seahorses. When the tide wasn't low enough, the water became murky and had zero visibility when we moved. We were supposed to walk in a vertical line and forward and at least 2 metre apart from each other. But we were not instructed to do so.
Seeing everyone moved about, I told her it was okay. And I think I was so wrong by ignoring her concern. She is right. We could be stepping on those little creatures. 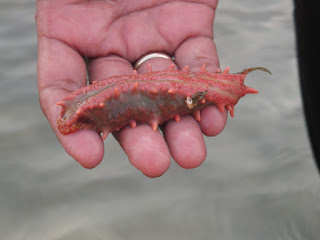 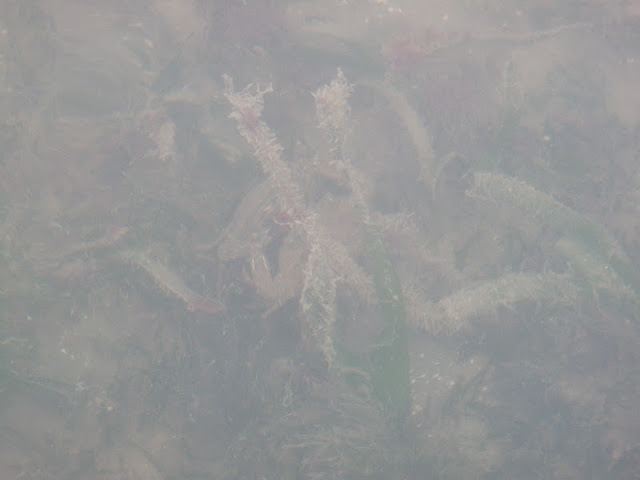 Not sure what type of crabs. They were in a pair. 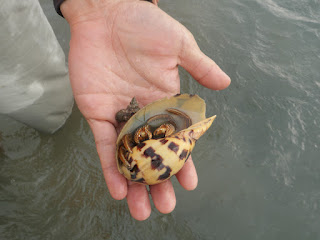 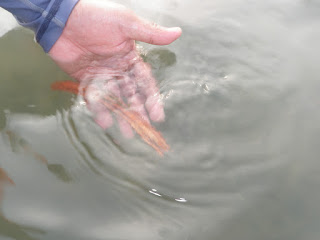 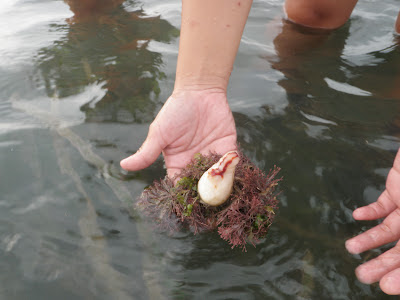 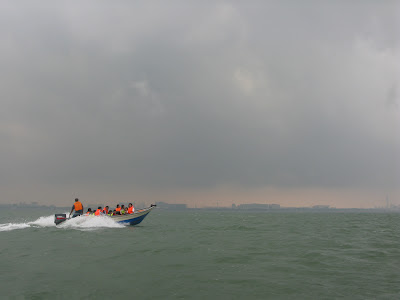 Shortly after that, we were ushered back into the boat as the rain was approaching. There was a sudden strong wind and waves became choppy. 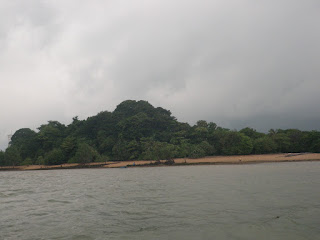 Instead of turning back, we were brought to this island instead, Pulau Merambong. 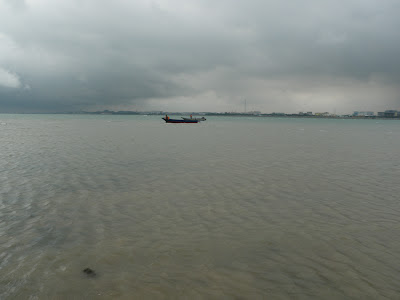 Our boats were parked kind of far from the  shore and we waded the low tide to the island. This photo was taken from the island. 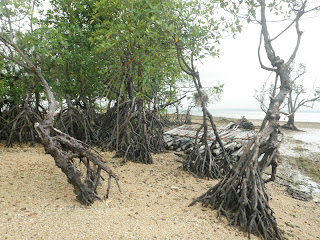 The island was beautiful and clean. Some were checking the tide pool.
It wasn't long then, my kid was cold and tired. And it started to rain slightly heavier. 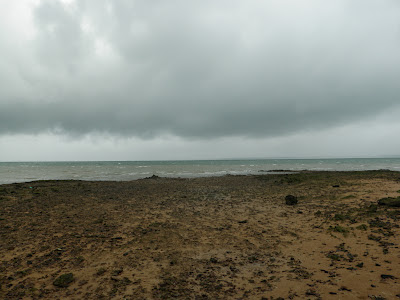 Look at the rain cloud.
Our ride home was choppy, windy and rainy. The raindrops hit my face painfully. We were drenched and cold.

Good times! I did the SOS Seahorse Monitoring Volunteer Programme 5 times. We managed to find seahorses on the first 3 trips, thanks to the sharp eyes of the marine biologist & SOS's founder, Choo. The final two times there was pollution coming from the direction of the Port of Tg. Pelepas :( Even the giant starfish and sea pens have reduced in number and the sea cucumbers looked sicker then. Am glad the project is still being sustained. Must go again soon.