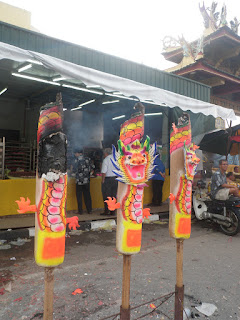 We arrived Ipoh on the first day of Nine Emperor God Festival and decided to take a peek on how the celebration is done at Tow Boh Keong, a Taoist temple at Jalan Tokong. As I drove onto Jalan Tokong, the road was congested by cars parked along the road on both side. As I drove on, a man signalled me to park at an empty slot by the road side. Without much hesitation, I took the offer just so I could get off the car and relieve my aching legs after a 2 hour plus drive.
When my children and I got off the car, the same man requested me to get a pack of incense sticks for RM5.     I wasn't sure if it is cheap but I took a pack from him, in return for his favour. 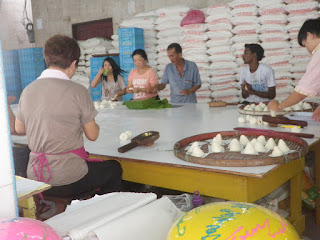 There were a a big group of people making pau (bun) at both side of the front entrance. 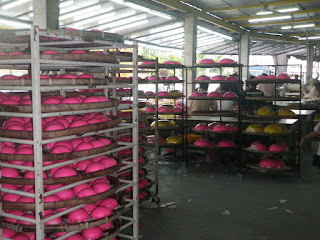 The bright pink colour pau caught the attention of my little kiddo. These pau were seen as offering to the Nine Emperor Gods. 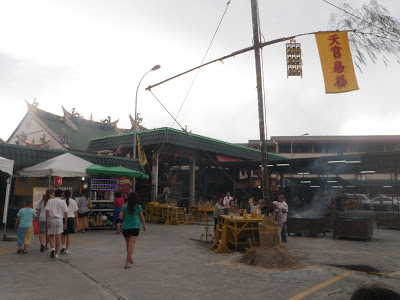 There were nine lights lit up, tied to the pole, right on top. 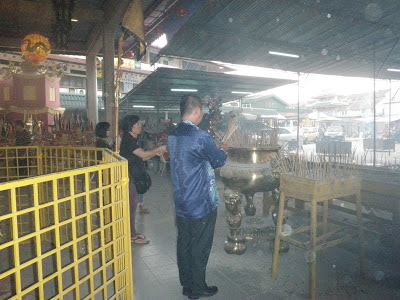 The observation on the praying ceremony was an eye-opener for both my kids and I. The only thing I know of this festival is, it will surely be raining on this day. That's what my mom told me. And so, I told my kids what my mom has told me. 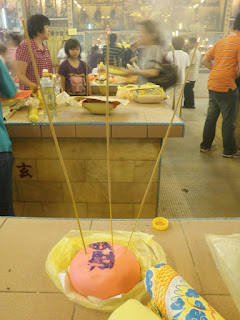 It was so smoky inside the temple that my children ran in and out of the temple, trying to avoid the smoke and watching the believers doing their ritual at the same time. It is funny seeing them running in and out. In the midst of that, I randomly asked two women which ones are the Nine Emperor Gods. They stared at me blankly and turned to the many statues of great god and deities. Then, they replied " I don't know!!!" 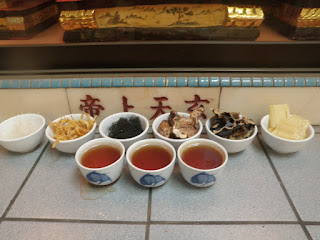 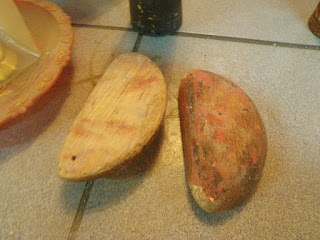 Two pieces of crescent moon shape wood that the believers pray with and throw on the floor.
Watch the video above. 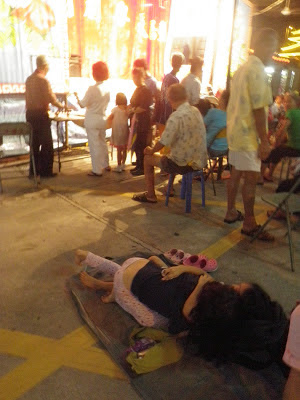 There will be a chinese opera performance every night at 8pm during the Nine Emperor Gods Festival.
Here we were waiting for the show to start.


While watching the show, I recalled watching it when I was younger. I didn't understand much of what they sang and yet, the whole performance was so captivating.
Posted by Ng Shannon at 12:03 AM