Description based on Hui's explanation, 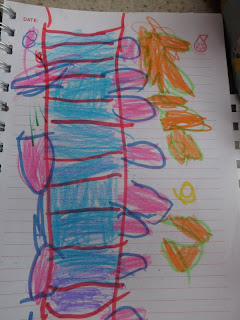 Beautifulyl decorated ladder, with a dragon beside it. 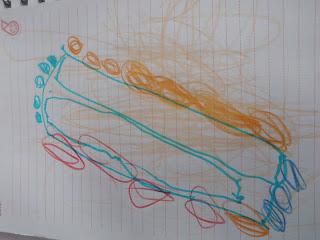 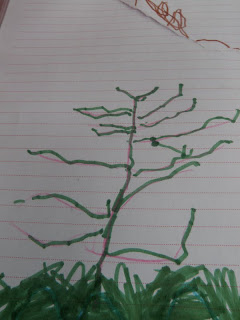 Buffalo grass with lots of leaves. 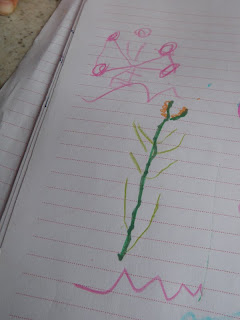 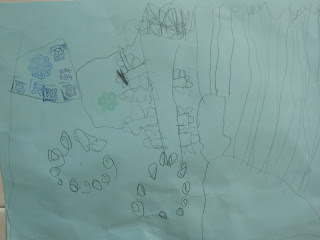 Right - tall tree trunks on soil.
Middle - a tree with leaves, is about to fall down on my bracelets (bottom)
Left - Two decorated rocks to stop the tree from falling down.
Posted by Ng Shannon at 1:51 AM 2 comments:

The lab.
Three easy-to-do toys.
1.Flying saucer.
Fold the paper plates to create lines for cutting.
Cut into 8 flaps of similar sizes.
2. Hoopster
Tape two paper rings of one small and one big size on the straw.
3. Parachute.
Tie a string at the end of all four corners of a small piece of plastic bag.
Gather the four strings together and tie a knot.
Stick a small size of plasticine at the knot.
Posted by Ng Shannon at 12:30 AM No comments:

It all started with En's wish to stay at Acacia/Tembusu family unit at Ruby's Resort. We usually took the cheapest room when we were there.
I told her " How can we afford to stay at this more expensive room?"

Then, one day at Mc Donald, she saw the "Mc D Olympic Day Fun Run" brochure and read about it. And she said " I want to take part and win the cash money. Then I can use it to stay at Acacia room at Ruby's Resort ". With this goal in mind, she was determined to go.


We parked our car near Bank Rakyat and walked to Dataran Merdeka at 645am.
En and dad looked  for their waiting compartment.
Dad went into the first enclosure as his group of men/women started at the earliest time of 730am and run for 7km.
En waited for her group of aged 7 to 12,  to be called into the waiting enclosure.
Her group started at 8am and run for 3km.
.
Hui with her watchful eyes on En who was in the enclosure.
I think En is brave, being alone for her first run. I wouldn't have done that when I was 7.
En and her group waited for their turn.
After 30 minutes of waiting, she was tired.
Such a huge crowd of children.
While they were waiting, the first man runner returned from his 7km run which started at 730am!! He won RM500.

When the fences were removed, the children raced towards the starting line in front of them.

The children at the starting line.
At this point,  I couldn't see En anymore and was bit worry for her safety.
After hearing the starter pistol, the children ran so fast. I couldn't see En at all.
At this point of time, dad returned from his 7km run, in 40 minutes time.
What Hui did while we waited.
I was at the finish line at 835am, waiting for En's return.
I began to worry when I didn't see her and the annoucer said that most participants were heading back already. I turned away and saw her waiting after the finish line !!
She didn't win any cash prizes and was dissapointed. So I asked her "Was the run easy?" She replied, "Difficult"
I found that this time around, she bounced back pretty fast as compare to her dissapointment at Kidz Ride. In less than a minute, she said " Let's try again next year" What I did was just keeping quiet and listened to her. Perhaps, she has learnt to deal with it at the Kidz Ride.
At 915am, many exhausted runners were walking back instead.
For En's first run, I thought she ran pretty fast, about 30 minutes for a 3km distance. She said "I walk a short time as I am tired. I have to keep running as I want to win." And she added  "Let's bring a bigger wheel to the Kidz Ride next year".
Will I rent the Acacia/Tembusu room for her ? No, I will not.
I think she is proactive in chasing her goal and I am so proud of her.
Posted by Ng Shannon at 12:04 AM 2 comments:

Read 34th Bon Odori 2010.
I didn't think we will attend this year's Bon Festival, knowing that on Sunday morning, En has to wake up early for a run.
En said " Mom, I want to go. I love everything. I want to see all."  And so we came.
This year, we arrived an hour earlier.
The parking next to the stadium, at Panasonic R& D centre.
Free visitor's parking.
The stadium is next to the parking space but there is no short cut through the fence.
Guest performance rehearsal at 4pm.
A closer view of the rehearsal.
At the stage, was the Cultural dance's rehearsal.
Varieties of ice cream on sale.
We took our time, shopping for food.
At 415pm, there was no queue at all.
Barbeque squid.
My dinner, yakisoba.
Hui' s dinner.
Fresh mushroom from Japan, so the spokeman said.
I took 2 fans but En insisted on 4.
Later on I realised, it was because the fan was needed during the cultural dance.
This year, we remembered to bring a mat for sitting on the ground.
En danced along.
Bon Don dance.:)
To avoid the jam, we left at  745pm.
Posted by Ng Shannon at 11:45 PM No comments:

This ride at Taman Lembah Kiara is done in collaboration with LITTLE RIDERS.
Each participant was given a number to be hung on the bicycle. En came with a goal to win a bicycle bell which she has been wanting for a long time.
En and her hanging stunt.
Kids were whisked to the enclosure before it began.
Hui rode along with this group, aged 4 to 6.
Hui tried to ride with all her might.
She was happy, getting her first medal.
En was with the oldest group, aged 7 to 10.
A minute into the ride, her helmet fell back and hung by her neck.
I have to keep on cycling, to win, so she said.
At the end of the ride, En was in tears. She was disappointed over her failure in winning the bicycle bell.
It was a feeling of sadness and hardship of not able to cut-it despite giving her best shot on that day.
More info on this carnival
Posted by Ng Shannon at 1:14 AM No comments:

It was a free organ recital on music with a strong Belgian connection, in conjuction with Belgium's National Day on 20th July.

I took this opportunity to give Enhui a sample of Belgium by letting them experience Belgian organ music
And some information on Belgium.
Posted by Ng Shannon at 12:22 AM No comments:

This fun one hour first aid session was conducted out of goodwill by a lecturer @Taylor. It was a great one hour for me, reminiscing memories of my past first aid examinations and classes that I have to sit in ! :D
And for the kids, it served as an introductory on what first aid is all about.


The slides are informative on first-aid related matters where it touched on burns, choking, first-aid box..
This is the place where the hands-on CPR was performed.
"John" our patient.
The position to perform chest compression, on the sternum.
2 breaths followed by 15 compression.
Posted by Ng Shannon at 12:16 AM 4 comments: